I am not sure how, and I am really not sure why- their core audience seems to like their Bohemes and Toscas served on schedule and as conventional as possible- but Washington National Opera has put on a shockingly great production of Peter Grimes. I was there for the opening night yesterday; this is possibly my most favourite opera (OTHER than Don Giovanni, do I need to say that..?) so I procured the tickets (cheap but decent seats in 2nd Tier) months ago. However, I honestly did not expect too much, and , my gods, what a surprise!
Originally created for Santa Fe opera, this production has several things going for it: people come to Santa Fe coz they really want to, and so there is no need to cater to musty old audience, or worrying about putting random tourists' butts in their seats, and that means creative freedom; but it is still privately funded, and without the government subsidies, there is less danger of a totally free wheeling Eurotrash "artistic team" threatening to "update"this opera to yet another Planet of the Apes version.
Of course, WNO still managed to put a piece from Grimes/super fake lighthouse, Kinkead worthy collage on the cover of the program , but this is DC for you. And where else you could witness the following scene: a flustered couple runs into the elevator minutes before the curtain time, rumbling about tickets; I am thinking they forgot theirs at home, and had to get a reprint; happens all the time; indeed, the guy says "Jesus F($&^$(&ng Christ, I had the old Tosca tickets in my pocket" and the woman says "You almost knocked over Ruth Ginsberg!"....
On with the show: first view of audience: along with my posse, a whole bunch of people under 65 present! Fresh blood! First view of the stage: no raked stage! Progress! Also, set up looks good. Kipling monkey Dootsy climbed our of the bag instantly to stare at the fishermen houses and pose, aft style, on the bag: 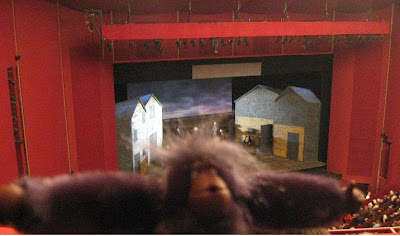 The houses actually started moving and closing in to form a tighter space over the tuning of the orchestra, thus beginning their creepy, shifting scenery role. Orchestra opening was good, the young conductor Ilan Volkov showing that things were well under control as he launched into Prologue, with Swallow (Daniel Okulitch, fully dressed and sounding great) announcing that "We have come to investigate..." but then came the first surprise: the chorus. I mean THE Chorus! Other, not so shabby choruses I have heard live recently at other opera houses (the Met and COC) cannot even begin to compare favourably with the WNO's present state. The Director's notes in the program do say that the chorus is "the biggest, most influential character in the opera" and it sure was here, and sounding amazing: precise, powerful and totally ON. And obviously given stage directions; they moved with a predatory grace of piranha's shoal of fish. I was so preoccupied with how good the chorus was that it was only when they filed out that I begun to pay attention to Ellen (Patricia Racette) and Peter Grimes (Christopher Ventris). Actually, their first scene was their weakest; they had some trouble tuning in, but they soon hit the stride.
Racette's voice did not sound as good as I remembered from her Jenufa two years ago; the vibratto much wider, top notes not super secure; possibly this was partly caused by the orchestra holding nothing back in big moments. She is still totally riveting on stage. Ellen is true goodness, strong and brave, as her "Cast the first stone.." confrontation with the crowd made it clear, even as heard and viewed from the rafters. Ventris showed a ringing voice combined with something of a really great body language; wired or weary, here was a completely believable Grimes, without any cheap histrionics.
Soon after, Alan Held came to the fore and, as it is his custom in any opera at any time, proceeded to sing and act the living dickens out of the role of Captain Balstrode. His big scene with Grimes was a study in vocal heft- after all, both him and Ventris earn their living by mostly singing Wagner- but it was also all white hot emotional intensity. Ventris' "Great Bear and Pleiades" aria was merely good, soft singing not being his forte, but the pub scene was great overall. The Nieces- young, smoking hot and beautiful sung by Micaela Oeste and Emily Albrink- showed off their goods, in more ways than one, and Ann McMahon Quintero's Auntie kicked butt all over the place. Since Grimes the Opera has no convenient breaks for clapping mid acts, the audience had to sit tight, but one could smell the goosebumps. And as soon as Act 1 ended, there was a tumultuous ovation. Hearing a non Puccini opera, "modern" opera, and without Flacido Domingo singing in it, DC audience was all riled up.
Act 2 was even better; never mind the orchestra hitting a rough patch in the opening Interlude: it was just about their only slip up of the entire evening. Beginning with the Church scene, Ellen and Grimes' confrontation , with all the small details working like a charm- like the boy suddenly hugging her desperately before being dragged away by Grimes, up to deftly handled mob scenes, the chorus ganging up and marching up in military formation to get Grimes, and then the feverish, claustrophobic scene in Grimes' hut culminating in the cliff accident that was handled as well as it could possibly be... And the ladies "From the gutter" quartet was vocally sublime and beautifully staged. Another ovation greeted the end of Act 2.
At the begging of Act 3, with stage bathed in blue light, the Kipling monkey was barely hanging on to the bag: 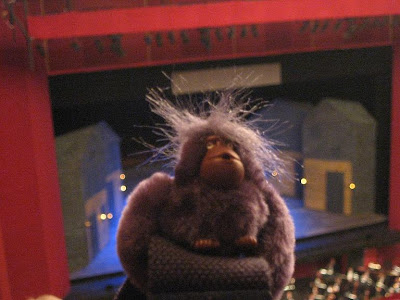 Ms Sedley (Myrna Paris) was spot on in her spinderly "detective" work, and what she started built up to a most powerful finale; when she finally got the attention of Ned Keene (Keith Phares), him and Rev. Adams (Robert Baker), ending their sprightly jigs and snapping them back to crime fighting mode, and with them rounding up the crowd to finish off Grimes business, the tension was pretty unbearable; and then we found out that Mr Director had one more trick up his sleeve; as the chorus swelled up in one of their final "GRIMES!" invocations, the houses suddenly nodded and closed in on them at an angle, as if about to fall and crash them. And off their went on their blood hunt, leaving the stage to Peter Grimes' mad scene.
Ventris went for broke here, even cracking his voice a few times, and singing up an emotional storm, but it was only when Ellen and Captain Balstrode came in "to take you home, Peter..", that I found myself negotiating difficult choices of either taking out a crinkly pack of tissues and making a racket among the audience which was sitting in rapt silence, or using my sleeve to wipe my face and my nose.. (The sleeve won). And then, with Captain Balstrode delivering the steady "Sail out till you loose the sight of the Moot hall..." and Ellen emitting a choked up "NO!", I found myself totally and utterly choked up. I was able to join in the wild clapping that ensued after the curtain fell, for the last time, but I left the screaming of "Bravi!" to the guy next to me, bless his heart. Standing up in the 2nd Tier is a tricky business, but I could see that everybody in the main floor was on their feet. I feel spent just writing about it now... Bravi, tutti bravi, including the director Paul Curran, the lighting designer and the whole gang: 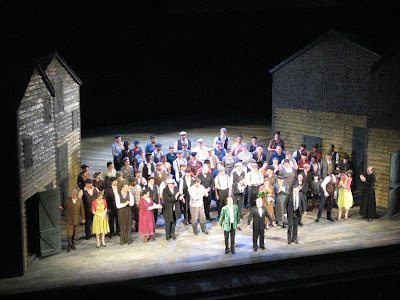 Corridor comments overheard afterwards: "It was... sad". Sad as in deeply moving, sure. I think most of people simply did not know what hit them...
If you can, do not walk but run to the nearest computer and try to get tickets for this production. Apparently, March 29 is already sold out. WNO has a great show on their hands, and they deserve to be keenly aware of that.
Posted by Akimon Azuki at 10:01 PM