Jacobs does Don part I 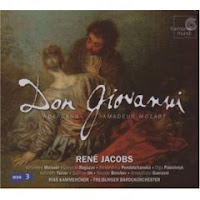 Finally, at long last! Concrete release dates and promos are being rolled out!
Harmonia Mundi will release René Jacobs' Don Giovanni in Europe on Sept 27 , US of A gets it on October 9, both as a SuperAudio CD (Amazon does specify it is an import and a hybrid disc) and a regular version. I will likely get the hybrid, not that I have any illusions about being able to play the SupC part just yet, but, just in case...
There are two audio samples available at HM site: the overture (sounds appropriately ominous) and Deh vieni alla finestra (sounds like nothing special...)
The cast is largely the same as in the Innsbruck production. Minus Lacroix costumes... please to release DVD at some point in the future, please! I am much looking forward to Pendatchanska; have not heard enough from the other singers to have an opinion.
The Don is young and completely unknown to me, but he does have a beautiful light baritone voice that is a must for me, for this role. I hate proper bassos singing Don... Judging by the Deh vieni sample, Johannes Weisser is not in the league of Peter Mattei, the best Don in this Galaxy (the Universe is too big and full of empty holes to count) but let's hear the whole thing first.
Someone kindly posted badly synchronized, but very interesting videos of the recording sessions on YouTube:

True to his form, Jacobs promises radical, wild and crazy things... for example, a very SLOW Fin ch'han dal vino ("there is a trill in this aria.. have you ever heard it?") . The cover follows the style of his Nozze and Cosi, and the box will look very nice on the shelf. Oh, and there's the music too, with outstanding sound production, I'm sure, enough to raise any neighborhood statues back to life...
-so why am I so blasé about this Don? Have I not been waiting with baited breath for years? Well yes, but in the meantime, Daniel Harding's recordings, the CD- available in iTunes - and the Brook's production on DVD came my way and nothing's been the same way since...
Posted by Akimon Azuki at 5:33 PM 4 comments:

It's only been a year since my last rant on rampant compression...? Well, I just read a more detailed account of that horrible procedure (thanks to Slashdot for bringing this to our attention.)
Over this weekend, I sat down and slashed my meager "rock, pop and metal" material on iTunes down, again, and could not fail to notice that of what remains, it's mostly old old 80s things. Not that Metallica's opus Magnum, Master of Puppets (first album on my first iPod!) does not need re-mastering- it sounds like $hit- but if they were going to make it sound like ze Black Album, then no thanks. Even such strange casualties as bunch of Nick Cave albums- Let Love In, for once- there was so much compression, they had to go. I can't listen to them any more , it's just physically oppressive, like trying to read Anne Rice vampire novels.
The article in IEEE (which also comes in cute multimedia version) makes a good and valid point of new media formats going to waste. But one memory I took from reading it is that, as usual, Sony was somehow responsible for the mess. Duh. SONY. Yee of rootkits and warring, inter-suing divisions. Oh, I have my own Sony stories. How about this: having acquired Sony's own PlayStation recently (the only console that my household was missing thus far), finding out that the sound from blue ray discs would get clipped and generally screwed coming out at the other end, on Sony's own receiver? And that Sony's own Super Audio CDs will NOT play on PlayStation? After half an hour of configuring the PS for SupCs, using the available menu item, disclaimer pops out, something about this format "not being supported". Granted, I only own three SupCs, one is Harnoncourt's freaky take on Mozart's Requiem which was released as hybrid/dual format; the other two I got by accident when trading CDs on LaLa. So, no great loss there, just a snigger at the royal sarary chrysanthemum mess that is Sony. (Can you tell I just read this book?)
Posted by Akimon Azuki at 4:14 PM No comments: