I started the 2009 music season not with a bang, but with a half step plop; let's hope it can only get better.
I have attended several Met HD broadcasts to date, and my 2008-2009 series had a killer, blood smeared opener in Matilla's transcendent Salome
-

(Karita rules the opera world, so what's new)-
followed by Doctor Atomic (loved it- it was da bomb!), and then LePage's La Damnation de Faust (high tech gear and a very comely Canadian bass, John Relyea.) The next pick from the list, Mark Morris' Orfeo, was a no brainer: Gluck plus a great mezzo in production designed for, sniff, the late Lorraine Hunt-Lieberson, what's not to like... However, handicapped by elements that were pointless (spastic dancing) or plain irritating (Daniele The Screech), even the mezzo could not save the show. Maybe Ewa Podles could, but then, while Blythe may seem to be "able to sing anything" (how strapping!), Podles really can sing anything AND always sounds like she f*%$$ng means it. Stephanie Blythe, not so much...
The thing is, I have been looking forward to hearing Blythe in a staged performance; what I had heard on record promised a fabulous voice, able to handle Handel and Baroque in general with great aplomb. However, the solid column of sound and somewhat bloodless performance that Blythe turned in last Saturday was not enough to make me care one bit. She can act, it just seemed she was too tired to bother. There were no ornamentations to speak of- why? Please, this is Gluck with Levine, not Verdi with Mutti ("come scritto or you will be execute"!). It could have been the cold that Blythe had been battling and which forced her to cancel one performance in this run. Indeed, in a rushed, perfunctory "Che farò senza Euridice" something slightly hoary and scary did creep into Blythe vocals, enough to make me wonder if she was really going to make it to the end. The voice is gorgeous, contralto rich, and with a fab baritone bottom, and I am still looking forward to hearing it live, in a recital with WCO, but this was not a good day for Blythe; I believe she can do better than this.
The resident Euridice, wearing a shaggy carpet white dress, did not help in the least. I have grown very tired of Danielle de Niese recently; after seeing her bubbly Hebe in Les Indes Galantes, I had high hopes for her, expecting more goodies from William Christie sponsored indie groups. That was until I was assaulted by her Cleopatra from the Glyndenbourne Giulio Cesare. She basically screams through her entire performance, hoofing and dancing like a well trained pony; her V'adoro Puppile is downright scary. Such mighty muscular arms, such big, loud mouth... It's a nondescript voice, breathy and badly supported, always pushing and trying to sing LOUD, all the way, all the time; no amount of dancing can help there. Though ably assisted by Angelica Kirschlager's rabid, scenery chewing Sesto, the Screech herself pretty much ruins an interesting production of one of my favourite operas. Now De Niese is Ms Media Darling, armed with "great looks" (whatever) and a debut album that can indeed be described as a real dog, except it would be insulting to dogs. Judging from the performance I witnessed on Saturday, the bleaty singing has been augmented by more intense "acting" (such nostril flaring, in full HD) and repertoire of facial acrobatics, some of which give Cecillia Bartoli and her "I Can Smell Stinky Cheese with One Eyebrow Cocked UP, all the way UP!" serious run for her money. The good news is, now that she is such a star, no more Rameau and other obscurities! We is SAFE, for now...
Amor was sung by Heidi Grant Murph: ouch. Very eeky squeeky sound, like a more wobbly and underpowered Debbie Voigt, but ever so cute in her sparkly polo shirt. I have actually heard Ms Murphy live recently, in Opera Lafayette's Zélindor, and my impression from that day - nice lady, small voice, not much else going for her- still stands. Met chorus was ok, and decked out in silly costumes, all symbolicly ponderous and super drab.
And finally: ze production, which, in gist, can only be described as "The Longest Gap Commercial Ever". Tiered chorus stands and utterly pointless ladder; voilà, scenery! Chorus stands at an angle: voilà, Gates of Hell! Craggy melted plastic: the Underworld. No costumes, just some casual wear procured at a nearest budget outlet, all khaki and washed out greys and dingy whites. And, in an opera with a legit ballet music, a smorgasbord of dance moves with no rhyme and reason. A mix of different styles, with no point to it other than hopping along to the music. Total nucular waste. Some stylized baroque dancing towards the end, but the hoedown at the very end - wtf. And, WTF was that rolling hand gesture? He's got the whole world, in his hands, indeed! I was not amused. I was glad they chose the shortest possible version of this opera. "Slumdog Millionaire" has better, open air staging of Orfeo (French version and all) in it. And Mark Morris needs to get clothes that fit, Gap, whatnot, just cover up, for all our sakes! Curtain calls are not for gratuitous nudity, and especially not for sneak peaks of Morris' underbelly. I know that I am not the only one that was startled by that flashy fleshy thing...
The Kipling monkey which went to see this broadcast, Mr Olaber, slept through most of it, only came up to cheer for Blythe: 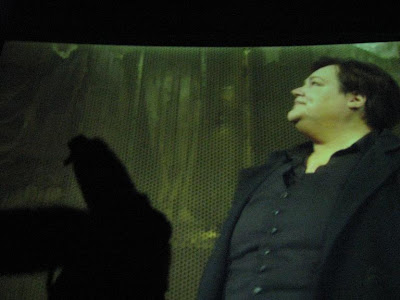 He will have more to cheer on Thursday: the real deal, a totally obscure Baroque opera done right, at the Kennedy Center Terrace Theatre. Repeat after me: Opera Lafayette presents: Pierre Alexandre Monsigny's Le Déserteur. Yes, they do! Yes, things can only get better now.
Posted by Akimon Azuki at 10:23 PM No comments: