The last M-word you will ever need

'Twas another Friday, another promise of an exciting American Opera Theatre production!
Except that the work which was given the AOTreament was an unfortunate choice: Handel's M-word, which can only be fun in this context.
As much as I love Handel (and when it comes to Cesare, Orlando and Rinaldo, and assorted fluff, I really love Handel) I could never comprehend why that particular oratorio is so popular. It's way too long, has a plodding structure, and only in couple of choruses does the music even start to sound interesting, just before it is briskly pulled back into rather banal Baroque twiddling. "I know My Redeemth LEAEVETH" (thank you Emma) is vaguely pleasant, especially when done with gonzo ornamentation by the likes of Julianne Baird, but after hearing the whole thing live at National Cathedral some twelve years ago, and few thwarted (life is short) attempts to listen to Gardiner recording, I just gave up. Why not do Samson, or Saul, or Alexander's Feast, or the wonderfully fawning Coronation Anthems, or go for the high octane drama of Hercules and Theodora, instead of giving in to the sorely mistaken Christmas tradition of doing the Messiah rounds, in spite of best efforts of people who care. It's the Hallelujah chorus, innit? People are suckers for big hits, right?
Still, I am a sucker for AOT, after they stole my heart with Cavalli's La Didone. So off we went, accompanied by a Kipling Monkey named Marcy. Here she is, just before the kick-off, with the backdrop of the Gonda theatre stage, littered with- gasp!- torn book pages! Such violence! No wonder the orchestra hid behind the screen... 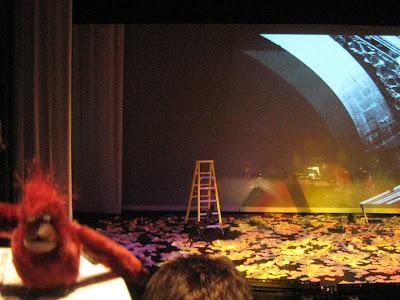 As it turned out, violence was very much in, and it was not just the books that were beaten up. While Handel's score was solidly performed on period instruments (with just a few snafus here and there) and energetically conducted by Tim Nelson, and the chorus, consisting of rounded up G-Town students sang just fine, though sadly amplified, the soloists were given much rough stage business to perform, and did not sound evenly good. Kristen Dubenion-Smith, billed as mezzo, sounded great in terms of her basic deep, contralto-ish sound, but Bonnie McNaughton sounded really off. Tenor- well, who cares for tenors... not me, nor the Kipling monkeys. Just like moi, they are well known for their love of baritones and basses and worship the God of Baroque Thunder, and so Marcy did come out and started jumping quite excitedly at "He trusted in God that He would deliver Him" sung by bass David Newman, and perked up at several instrumental passages, but that was pretty much it.
As for the staging, I will refer to Michael Lodico at Ionarts who gives a blow by blow (literally!) account of the proceedings. It made SOME sense as literal reading of the text, but it did not make for terribly compelling drama. Couple of cute/tortured/beautiful angel poses struck by soprano Sherezade Panthaki, who also sang quite beautifully, stood out. (There are several pictures posted on Tim Nelson's blog). Violence aside- I know VRN cringed at the massacre of the books and the rough treatment of IKEA furniture- it was an interesting performance, but I think I have had my full share of the M-word for ever and ever, amen. Much other music deserves to be heard instead.
And speaking of which, I found this in the M-program, and indeed AOT has now officially announced their new season and put a huge and ever expanding grin on my face: they are doing my eternal favorite, Cavalli's La Calisto (which I just happened to feature in October post to mark an important event in my life), and Bizet's Carmen, which of all cheesy overperformed opera evergreens is my favourite cheesy evergreen, and Handel's A&G (ze GOOD Handel, ja) and some bizarre Glass opera that sounds like great fit for a truly outrageous staging. And I can't wait for Charpentier's opera in May 2008. Truly, I say unto them, I hope that they hath exorcised their M-word jonesing and will stick to quality works from now on.

UPDATE:
This is now getting interesting: there is a "Letter to the Editor" from Tim Nelson, on the Ionarts post, and Micheal's witty "The M-word... S&M" title is gone, but the comments are being fired from all sides. And while being chastised for his "wrong reading", VRN is being taken to task for saying that M-word is- gasp!- not a masterpiece. Now we really should have a ban on it...
Posted by Akimon Azuki at 11:08 AM 1 comment: