Compression Oppression and Equalizer for All

I read this excellent article, courtesy of Sasha FJ/Alex from The Rest is Noise, which finally explains why most of the recent non-classical albums I have been subjected to sounded so... oppressing is the word, methinks. Ha! I knew they were up to something, just didn't know the details. Alex has a fascinating picture of what can only be called a brick of sound in his follow up post. He also mentions the tricky issue of safe shuffle use on iPod when playing a mix of classical and these souped up tracks. Well, gee, there's an easy fix for that. Getting the bands and sound engineers off the Compressed Till Your Ears Bleed wagon- that'll take some time.
First of all, let it be known that I heart them iTunes very much, except that buggy new version no 7 which made every piece of music on my PC sound distorted, hissy, overamped and totally unlistenable. I had to resort back to version 6.5 and that was a painfully messy operation, but at least I can again listen to my sprawled collection. The back and forth update also wiped out the customized equalizer settings I had for certain albums, so I had to go back to working these sliding thingies again, to assure peaceful shuffle times on the Washington Metro Second Circle of Hell (ie morning commute.) I use these settings mostly to bring down the levels of rock, pop and Bollywood songs, but also to fix up other audio issues. Seems like this is not a very well known feature, strangely- if you ask me, that's one of the best things about iTunes. I figured I will post it for the good of the mankind and aural stability of folks like me who have, shall we say, very eclectic collections of music. I don't mean eclectic as in "not just pop, but also rock and country", I mean mix of classical- Gesualdo, Reneissance lute songs, mostly Mozart everything, 1950s Wagner recordings, 1902 Moreschi and such, along with Indian, Polish and global village music, plus Bjork and loosely defined rock, heavy metal, death metal and symphonic death metal.
The equalizer on iTunes, that neat little thing, allows you to set up customized equalizer presets for any particular album or individual songs and save them as default for these tracks- and these settings can include volume up or down. 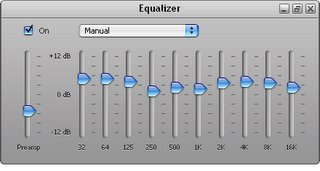 To simply squash the volume, let's say on these fabulous screaming Soundgarden songs: pull up the equalizer, best if the songs in questions are playing so you can hear how different settings affect the volume, choose the Manual setting from the drop down menu on the top, and set the left side "Preamp" bar lower to reduce the dB level. This goes from -12 db to +12 and allows for quite a range. Whenever you think it's low enough, click in the drop down menu again and select "Make preset" to save your preset under a given name (QuietGarden, for example.)
Then go to Library, highlight the Soundgarden song(s) and right click on "Get Info"; once you are there, select the "Options" tab and choose the "QuietGarden" from the Equalizer Preset drop down menu.
If it's just less volume you want, you can also use the Volume Adjustment slider right above the Equalizer Preset, but I find that this one is a very blunt and tool and can squash the sounds too much with just a slight slide to the left and so I use it less often, or, lately, not at all. 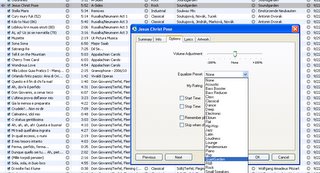 If you pick the custom preset- and BTW this can also be used for albums and other collections, just select the whole lot and click get Info- then just click OK and voila, it's saved as the default equalizer setting for that Soundgarden song from now till kingdom (or new iTunes update, God help us) comes and it's safe to shuffle at will.
Even during time on Washington Metro Third Circle of Hell (afternoon commute.) And for all these people with their portable players who listen to their oompa oompa music on such loud settings that the whole Metro car can hear it out of their headphones: "F&CK YOU RIGHT IN THE EAR< YOU STUPID< SOON TO BE DEAF GITS!" Ah, the sound of silence... and Fretwork and Kirkby doing Byrd...
Posted by Akimon Azuki at 3:20 PM No comments: